Illustrations accompanying the text of the investigated books

Appendix: Imaginary meeting in a teahouse, in the neighbourhood of Kyōto, during the last years of the eighteenth century, of a Dutch surgeon, on his way back from Edo to Nagasaki, with a Japanese physician, practicing at the Imperial Court, an enthusiastic annotator of his books.

The main text is followed by a very extensive appendix (付録) in which the author describes an imaginary meeting in Kyoto, at the end of the 18th century, between a Dutch physician and an important Japanese physician, practicing at the Imperial Court.

In order to compile his work, professor Lukacs travelled many times to Japan, doing research in the major medical libraries of Tokyo, Kyoto, Osaka, Nara and Gifu. The subject of the analysis of marginal notes in Japanese books, sheds light on the reading habits of the intellectuals of the Edo Period, is a totally new field and in this respect the work is highly innovative. The book has been prefaced by Professor Briot (Paris), both in Japanese and in English.

Professor Gabor Lukacs, extensively lectured in the past in many Japanese universities and published in 2008 another important book about the history of Japanese medicine, entitled: “Kaitai Shinsho (解体新書), The single most famous Japanese book of medicine & Geka Soden (外科宗伝), An early very important manuscript on surgery” 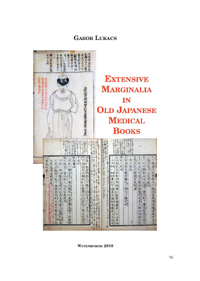