Chinese Dermatology on a Japanese Handscroll

Preface (Chinese)
Preface (English)
Acknowledgments
Foreword
Introduction
Pictorial Illustration of Medical Cabinets
Waike Qixuan, �Disclosure of the Secrets of External Diseases�
The Handscroll and its Two Sources
The Illustrations and their Accompanying Text
Explanatory Notes about the Illustrations by Alain Briot
Appendix
The Chinese Chronology of the Most Important Dynasties
Notes Related to the Text
Selected Bibliography
Index

Dr. Gabor Lukacs (Budapest, 1937), a member of the Japanese Society of the History of Medicine, a former research director of the most important French research centre for medicinal chemistry, a specialist of nuclear magnetic resonance spectroscopy and antibiotic chemistry, published more than 160 papers among which 25 in collaboration with Japanese scientists. Several of his students are full professors in major universities. His interest in Japanese culture dates back to the 1960’s when he was a post-doctoral fellow in Ōsaka. Later, he was invited three times by the Japanese Society of the Promotion of Science to lecture in various Japanese universities. In recognition of his scientific contribution, in 1996 he received the Kitasato Medal.

He devoted most of his time during the past fifteen years to the study of the history of Japanese medicine. His endeavour resulted in the publication in 2008 of the first book in Western languages about Kaitai Shinsho and Geka Sōden, two landmarks in the history of Japanese medicine.
In 2010 Dr. Lukacs published Extensive Marginalia in Old Japanese Medical books, the first of its kind devoted to the subject of handwritten marginal notes, opening a new field of research.

Dr. Alain Briot (Paris, 1944), medical doctor, specialized in dermatology, a member of the Japanese Society of the History of Medicine, an award winner of the Paris University of Medical Faculty, is a Japanese language diploma holder of INALCO (Paris University of Foreign Languages). He was also a Japanese language translator for the French National Scientific Research Centre. He retired recently after forty years of clinical experience and private practice in dermatology. He collaborated to the Historic Dictionary of Japan edited by the French-Japanese Cultural Centre, Tokyo, to the History of Medicine, jointly published by the Albin Michel/Lafont/Tchou Companies and authored many articles about Japanese medical history and Japanese Art. 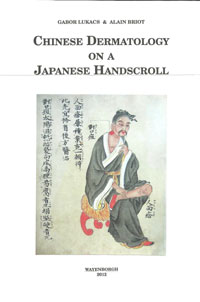 You're viewing: Chinese Dermatology on a Japanese Handscroll €90,00 excl. VAT
Add to cart