The American Glaucoma Society: Its founding and first 25 Years

The tree on the cover of this book, shown in three stages of growth, is an apt metaphor for the American Glaucoma Society (AGS). It was planted in recognition of the integrity within our profession, and its growth, which spans nearly the full lifetime of the Society, has been steady and strong.
It is a Washington Hawthorne and was planted on the campus of Iowa University, June 12, 1987, during the first scientific meeting of the AGS, in memory of Dr. Charles D. (Chuck) Phelps. Chuck was a founding member of the Society and attended the first planning meeting on November 11, 1984. Tragically, he died of cancer less than one month before the next meeting on September 29, 1985, at which time the AGS was voted into existence. Chuck represented the finest qualities of our profession and embodied all the principles of integrity and devotion to scientific excellence and quality patient care on which our Society was founded. In his memory and in recognition of our commitment to perpetuate the values for which he stood, our first scientific meeting was held on the campus where Chuck had served as Chairman of the Department of Ophthalmology.

The tree was planted in a special ceremony during the meeting along the path that Chuck took each day from his home to his office on the Iowa University campus. Later, Lee Alward commissioned a poster to commemorate the special occasion and the special person. The tree was barely three feet tall on the day of its planting in 1987, but has grown steadily in beauty and strength ever since. I had the privilege of returning to the campus in 1995, at which time the tree was approximately 15 feet in height, and again in 2007, by which time it had become a full-fledged tree. In the fall of 1998, the tree was transplanted and now stands beside the new departmental facilities along with a commemorative bronze plaque.
So, the Phelps tree and the AGS have similar origins; one dedicated to the life of a colleague who embodied the best that our profession has to offer and the other to a commitment to carry on those values in generations to come. And, like the Phelps tree, our Society has enjoyed steady growth in both size and stature. To commemorate our heritage, the Executive Committee of the AGS voted to commission this book, which tells the story of our founding and our first 25 years. Since it is a book to be shared among friends, recounting memories of our times together, the format is intentionally casual and hopefully fun to read. In that spirit, we have dispensed with “Dr” and “MD”, etc. for most of our names. But this relaxed format should not detract from the remarkable accomplishments of our Society in its first quarter century.

The soil on which our nascent Society was planted included a series of scientific meetings called ANGLE, and it is appropriate that Doug Anderson, a founder and organizer of those meetings, opens this book with a brief account of that part of our history. It is equally appropriate that Max Forbes, whose concept it was that led to the creation of the AGS, share with us in the next chapter the sequence of events that led to our founding. During our first 25 years, eleven presidents have completed their tenure and each has provided a chapter that relates the principal accomplishments of the Society during their time in office, as well as their personal recollections of the AGS at that time, what aspirations they had for our organization, where they feel we have succeeded and what future generations might consider as they strive to continually improve the Society.

The AGS was founded with the primary mission of disseminating knowledge regarding glaucoma for the betterment of our patients, and a chapter by Greg Skuta on the evolution of our scientific meetings follows the president’s chapters. As time passed, however, it became apparent that our Society needed to expand in scope, especially in the areas of promoting research and patient care and to serve as an advocate for our profession and our patients. Accordingly, the next three chapters focus on research and fellowships by Ted Krupin, Harry Quigley, Lee Alward and Bob Ritch, health care policy and advocacy by Ron Fellman, Lou Cantor, Chris Girkin and Paul Lee, and our affiliation with the American Academy of Ophthalmology by Martin Wand and Rick Lewis. The authors of these chapters, along with many of their colleagues who are acknowledged in the chapters, have made major contributions to one or more of these key areas in the life of our Society.

From the outset, it was intended that the AGS should be open and diverse, welcoming all persons in North America who demonstrated a commitment to caring for patients with glaucoma and expanding our understanding of this discipline. Hence, an especially important chapter, celebrating women and diversity in the AGS, has been written by Eve Higginbotham and Ann Coleman, with contributions by Deepak Edward, Kevin Greenidge, Elizabeth Hodapp, Paul Lee and Roy Wilson. The significant contributions of our Canadian colleagues in the AGS are acknowledged in a chapter by Gordon Douglas, Stephen Drance and Ray LeBlanc. We have also enjoyed rewarding relationships with our sister glaucoma institutions around the world, especially in Europe and Japan, which are highlighted in a final chapter on the AGS and international societies by Erik Greve, Yoshi Kitazawa and Roger Hitchings.
It is quite appropriate that the final word in this book be provided by the person who rightfully deserves to be known as the “Father of the American Glaucoma Society”, George Spaeth. In his Epilogue, George eloquently reflects on the values that framed our Society and offers sage advice to those future leaders who will bear the responsibility of perpetuating those values.

I know that I speak for all of us who were present during this time in history, in saying how fortunate we feel to have had the opportunity to participate in the founding of the AGS and to have watched it grow these past 25 years. We hope this book will provide pleasant memories and a sense of pride for those who experienced this time in history, as well as a record for future generations, so that they will know of their proud heritage and be reminded of the principles on which our profession is grounded.
Like the discipline of glaucoma, advances in our Society have been astounding, and there is little resemblance today to where we were two and a half decades ago. But, also like our profession, certain important things never change. The principles of integrity and of always putting our patients first will forever be the soil in which the American Glaucoma Society will continue to grow and flourish.

The Glaucoma Landscape and the Origins of The American Glaucoma Society, Max Forbes

Strengthening Our Ethical Relations with Industry and Advancing Research (2001-2002), Richard A. Lewis

Honoring a Rich Heritage and Advancing an Agenda of Promise (2005-2006), Gregory L. Skuta

The American Glaucoma Society and Its Relationship with the American Academy of Ophthalmology, Martin Wand, Richard A. Lewis 1 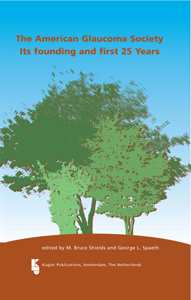 You're viewing: The American Glaucoma Society: Its founding and first 25 Years €50,00 excl. VAT
Add to cart