History of Otology Volume II: A Tribute to Adam Politzer

Albert Mudry’s History of Otology is fittingly subtitled: A Tribute to Adam Politzer. It has been over a century since Politzer published his classic Geschichte der Ohrenheilkunde (History of Otology) in 1907. His ambitious volume represented the first comprehensive book length treatment of the subject and has long been the standard reference source on otological history.

It would not be accurate to consider Mudry’s new volume merely an updated edition of Politzer’s classic. While Mudry’s treatment of the subject mirrors Politzer’s chronological approach, and both works cover the same era (antiquity through the mid-19th century), this contribution is fundamentally a new work. As such, it was created more in the spirit of an homage to Politzer, as an act of reverence and tribute, rather than an effort to modernize a book which was reflective of its time and place.

As scholars, the similarities and contrasts between Politzer and Mudry are noteworthy. Each dedicated themselves to excellence in both clinical otology and teaching; each prolific authors with extensive published scholarship; and each ardent bibliophiles with extensive personal libraries of historical texts. However, their career paths diverged in important ways. Politzer only undertook his History of Otology at the end of his nearly a half century of practicing otology. Politzer is better known for his Lehrbuch der Ohrenheilkunde (Textbook of Otology), written during the prime of his career, which is widely acknowledged to be the dominant textbook of its era. This clinical textbook appeared an impressive five editions over three decades (1878 – 1908). Politzer was an erudite scholar who routinely included historical context in his publications, but he lacked formal training as an historian.

Mudry, in contrast to his predecessor, is a classically trained historian with a PhD in History from the University of Lausanne. Unlike Politzer, Mudry has dedicated his entire career as a scholar to the study of otologic history. Among otologists who publish historical work of in the field, he is the only one who possesses advanced training in historical research methods. It is not coincidental that one of Mudry’s most noteworthy contributions has been his 333 page biography entitled: Adam Politzer, A Life for Otology.

As a 21st century historian, Mudry had several important advantages over his predecessor. Benefitting from today’s international marketplace for old books, journals, and manuscripts, Mudry has amassed an impressive personal library in otological history of some 1200 items (Politzer’s library possessed a mere 229 works)1. Politzer principally used historical resources in Vienna libraries and a few other European sites. Aided by modern high speed travel and bibliographic search engines, Mudry has scoured the world for primary source historical material which was not readily available to Politzer. Today, many of the more common historical otological texts and journals are available online in full text, greatly expediting their study. Despite these modern conveniences, creation of a comprehensive compendium of otological history from entirely original sources remains a Herculean task. Important sources can be rare, at times unique, and are widely dispersed geographically. They also appear in a diversity of languages with most earlier references written in Latin or Greek. A key skill of both Politzer and Mudry is a broad facility for languages. Politzer’s history was written in German, the dominant language of scholarship in its time, and not translated into English for three quarters of a century (1981). Mudry’s work appears in English, the more widely accessible language of the present time. In another notable enhancement, the new edition, unlike Politzer’s, contains historical illustrations.

Writing a century after Politzer, Mudry has the added perspective and context provided by the dramatic evolution of otology during the 20th century. During this era enormous advances in our understanding ear physiology and disease processes were achieved. Revolutions in technology such as microscopic surgery, electric drills, and electronic hearing aids greatly enhanced the otological armamentarium. I was pleased to learn that Mudry has plans to complete a thorough study of the second half of the 19th and entire 20th century. This promises to be a most welcome and valuable contribution.

Politzer’s 1907 Textbook of Otology was a masterful effort for its time, but nevertheless had limitations in scope, depth, and also contained more than a few errors, omissions, and inaccuracies. Mudry’s new volume surpasses Politzer’s efforts in its comprehensiveness, accuracy, depth of coverage, and exclusive use of primary sources. It shares one important attribute with Polizer’s 1907 text – that it is unlikely to be surpassed in the coming century. There can be little doubt that Politzer would be pleased that care of his legacy has passed to such capable hands.

CHAPTER FIVE: OTOLOGY IN THE 18TH CENTURY
Anatomy and physiology
Italy
France
German-speaking countries
Anatomical physiological discussions
First description of the Three extrinsic auricular muscles
The foramen of rivinus controversy
The invention of the tuning-fork
Anatomicalmodels
Pathology and general therapy
Nosologies
A survey of ear pathologies in the 18th century
Popular and domestic otology
Surgery and particular therapies
Catheterization of the eustachian tube
Artificial perforation of the tympanic membrane
Trepanation of the mastoid process
Electrotherapy of the ear
Instruction for deaf-mutes 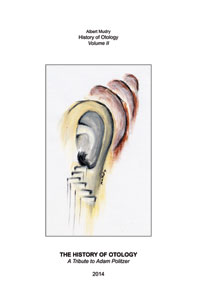