The History of Ophthalmology – The Monographs (6): Corneal Transplantation- A History in Profiles (second edition)

We live in the moment, and history is but a compilation of those accumulated moments. But we tend to forget many of the moments of history that have changed its direction.

Erasmus Darwin proved that imagination is at least as important as knowledge. The combination begets transformative events and new technology. Although Erasmus did not execute the idea or the instruments for corneal transplantation of human tissue, he proposed the idea in 1795 and was likely the fi rst to do so. Some might think him a prophet, although I believe that term is misused. A true prophet is one who recognizes a trend and enunciates it, but not necessarily the one who predicts or later executes it. Likely, others at the time were thinking of similar ways to solve a problem, but he had the ability to put knowledge and imagination together. It must run in those genes because his grandson, Charles, did much the same thing and changed the course of history in even more dramatic ways.

Even so, Erasmus was not the fi rst to propose the replacement of the cornea. The honor of fi rst proposing the idea of replacing an opaque cornea likely belongs to Guillaume Pellier, who, in 1789, proposed the fi rst keratoprosthesis, consisting of a convex glass in a silver ring to replace the opaque cornea. The fi rst attempt at such surgery is not known, but records suggest that Guillaume’s brother may have attempted it as early as 1792. It failed and probably quite quickly. Clearly, though, others at that “moment” were thinking of similar solutions for the treatment of an opaque cornea.

This illustrates that Darwin’s hypothesis and proposed trephine probably arose from within a farrago of competing ideas as others were thinking about the problem as well. This thought on improving vision was transpiring despite the lack of anesthesia, antisepsis, an understanding of glaucoma, or other such clinical, operative, and postoperative problems. These men, and others of their time, were the visionaries of what was to be but lacked the necessary tools.

Throughout the 19th century, small steps advancing toward a more scientifi c approach to corneal transplantation would appear. These included animal work, instrument design, and more thoughtful planning. Many of these individual steps, important as they were, fell away to obscurity, as did the memory of the men who were responsible for them. And yet, A History In Profiles ii most of the steps were essential to the development and refi nement of the procedure of corneal transplantation. It was the community of those interested in providing and improving health care who would advance the discipline. It would take a village of such minds.

The 20th century brought key advances in biologic insights, techniques, and instruments. Among these was the critically important introduction of eye banking techniques permitting the storage and improved distribution of tissue for transplantation. And, although the procedure can be performed with loupes, another crucial step was the introduction of the operating microscope to ophthalmology. Each step had its own signifi cance, but some of the men who took these key steps have been forgotten or their memories neglected. This book brings these men to life again—memorialized.

Currently, corneal transplantation is the most successful form of solid tissue or organ transplantation. It is elegant in its approach and execution and is being refi ned with each passing year. Lamellar surgery has been tried and abandoned several times in years gone by but now has fi nally found the right techniques and instrumentation in the late 20th and early 21st centuries to be successful. Those responsible for these steps in lamellar keratoplasty are still living and will take their rightful place in the progress of this marvelous sight-restoring surgery. Further progress will continue as some forms of lamellar surgery beg for simpler and more accurate techniques, even now. These necessary improvements will come, in time, as others seek to cure corneal blindness.

This book provides insights into our heritage as corneal surgeons and brings these remarkable men to life again. Taken together, it is an uplifting saga about blindness prevention. We should all be proud of them.

Part one: the birth of an idea

XXIII. The Trephine: An Historical Essay
Mark J. Mannis and Avi A. Mannis 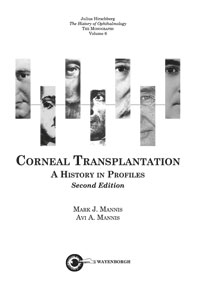 You're viewing: The History of Ophthalmology – The Monographs (6): Corneal Transplantation- A History in Profiles (second edition) €100,00 excl. VAT
Add to cart