The History of Otosclerosis Treatment: A survey of more than a century’s search for the best treatment of the disease

“Those who cannot remember the past are condemned to repeat it”, G. Satayana. This book is a must read for all treating patients with otoslerosis and for those who love the history of medicine. It will give you great insight in the history and development of the treatment of otoslerosis.

Hearing loss due to otosclerosis has been a subject of many different treatments. Since the understanding at the end of the nineteenth century that the disease was located in and around the cochlea and that it produces conducting and also perceptive hearing loss, all kinds of medical as well as surgical treatments have been applied to cure the disease. Most of the treatments have fallen into oblivion after the successful introduction of the stapedectomy in the late fifties of the last century. This book tries to highlight almost all possible treatments for otosclerosis presented in literature over the last hundred years. With the knowledge of today, many of the otosclerosis treatments of the past now seem absurd, but in reality generations of otosclerotic patients have been treated according to these treatments. The history of these treatments for otosclerosis shows the struggle of many well-meaning physicians and surgical ear pioneers to overcome the tragedy of the progression of the often genetic hearing loss due to otosclerosis. For those who are involved in the treatment of otosclerosis today, this historical overview will deepen the background of this specific ear disease and its forgotten treatments.

It is a great pleasure and honor to write this foreword. Prof. Tange has done an incredible amount of research into the theories of otosclerosis and the multitudes of treatments. He begins quoting G. Satayana: ‘Those who cannot remember the past are condemned to repeat it.’ This book is a must read for all of us who are treating patients with otosclerosis and for those who love the history of medicine.

The history of otosclerosis has a special place for me, as my father Howard P. House, MD was an early pioneer of otosclerosis surgery. During his training he was told not to diagnose otosclerosis as he was condemning the patient to progressive deafness. After finishing his residency in 1938 he traveled around the United States and Europe visiting various centers to learn from the giants in the field of Otolaryngology. While in Boston, Harris P. Moser, MD (Professor and Chairman at the Massachusetts Eye and Ear Infirmary) suggested that before departing for Europe he visit Julius Lempert, MD in New York. This visit changed his life. For the first time he saw a treatment that restored hearing: the one-stage endaural fenestration operation. Upon returning to Los Angeles in 1939 he was one of only two surgeons west of the Mississippi River performing the fenestration operation. Because of his visit with Lempert and the time he spent in Europe with other giants in the field, his practice became very busy. By 1947, he limited his practice to otology. His surgery schedule was booked for 18 months.

This book gives the history of otosclerosis from the 16th century to the present. Everyone will enjoy the reading and learning this fascinating history. In the late 1800’s, our predecessors attempted to help their patients with innovative techniques and in some cases with disastrous results that included meningitis and death. These procedures included attempts to mobilize the stapes by placing a vibrator on the umbo of the malleus, blindly mobilizing the stapes through the tympanic The history of treatment of otosclerosis viii membrane and even lateral semi-circular canal fenestration. All of these attempts were without magnification, poor illumination and antibiotics. Therefore, all further surgery for otosclerosis was condemned and no longer performed until the 1930’s with early pioneers of the modern era.

Prof. Tange also includes a comprehensive section on a multitude of medical treatments for otosclerosis. I was amazed to learn that there were descriptions of trans-tympanic injections of thyroxin into the middle ear to prevent the advance or reverse the affects of otosclerosis. It is interesting to note that the results of so many of theses studies were more or less subjective as there were no audiometers. Therefore, the results were reported with the whisper test or the patient’s subjective impressions. Also included as a comprehensive history of various listening devices including ear trumpets and bone conduction devices to improve communication for those suffering hearing loss due to otosclerosis.

As an avid fan of history I feel we can all improve our skills by gaining knowledge and inspiration of those who came before us. We have the advantage of learning from their ideas, successes and failures.

Treatment of otosclerosis and pregnancy

The treatment of cochlear otosclerosis

Click here for a review by Dr. Angel Batuecas Caletrio as published in Otology & Neurotology.

I was particularly interested in reading this book having recently reviewed the JLO Archives on this very subject. Mine was a snapshot effort, this is surely the standard work on this topic now. Most of us love to read of the history and evolution of surgical practice, especially amused by the false, often illogical trails our predecessors followed. This book actually stands alone as a good review of current thinking on Otosclerosis (OS) and is very readable. It is illustrated on every page, with universally well reproduced images, in colour or monochrome. The style is very much that of Weir and Mudry in ORK; an Illustrated History, so familiar to us all.

The author practices in his birthplace, Utrecht and has 1400 stapedectomies to his name! I also noted he shares with me memories of Ann Arbor Michigan. John W House writes the Forward and recounts how his eminent father was told not to diagnose OS, as it condemned the patient to progressive deafness. The author describes much of the practice that follows as absurd, indeed in so many cases highly dangerous.

The book opens with early history of course. I had never heard of Giovanni Ingrassia but now learn he first noticed the existence of the stapes in a cadaver. His divergent squint in his portrait is never explained. Valsalva in Bologna seems to have first described stapes fixation, Tonybee noted ankylosis in many a temporal bone, but to Politzer goes the credit for the first description of an OS focus.

Early conservative treatment involved pneumatic otomassage of the drum to “exercise the ossicles”. Lucae was even more sporting, in devising a gadget to allow repeated percussion of the malleus, to mobilise the stapes. Balance finally went on to open the lateral semicircular canal, accidentally of course, but with benefit. Politzer led the sceptics and surgery was abandoned for two decades so medical treatment was the norm…..and what treatment! This ranged from Irradiation of the parathyroid glands (as late as the 1920s), sex hormones from both genders, cortisone and of course flouride and bisphosphonates. The latter two are reviewed in a very updated and excellent sub-chapter.

Things got even dafter with such advice as avoidance of the seashore, lest the noise of the surf worsen tinnitus. Irradiation of the temporal bone and thyroid simultaneously seemed like a good idea and, if the pituitary gland happened to be in the field, so much the better.

The third chapter is entitled OS and Pregnancy but goes far beyond that and makes for very disturbing reading into Eugenics. It was not just in Nazi Germany, but also in the US that OS was seen as a “hereditary disease eligible for eugenical sterilization” (sic). Many a pregnancy was terminated to avoid worsening of mother’s hearing.

The book continues on more traditional lines to describe the evolution of stapedectomy, -otomy, prostheses, and lasers. Probably the single greatest advance in evaluating all this is that we now have audiometry! It is so worth seeing the first ever Teflon prosthesis. I always thought it was the famous strut, but it is far more elegant; it is a replica stapes with a hole in the “head” to encase the long process of the incus. I would love to try one, but nowadays we are all small fenestra I guess.

I enjoyed this book immensely and will reread it from time to time, if only to remind me how deluded we may yet be in our current practice. Now I must go and decompress that sac this afternoon. 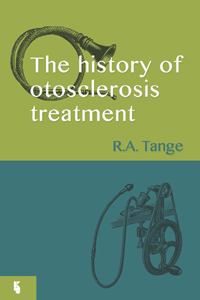 You're viewing: The History of Otosclerosis Treatment: A survey of more than a century’s search for the best treatment of the disease €100,00 excl. VAT
Add to cart