Medical Treatment of Glaucoma is the topic of the seventh World Glaucoma Association Consensus. Medical treatment of glaucoma continues to be at the core of glaucoma management. Hence, the results of this report will have broad and significant impact on glaucoma research and clinical practice. The global faculty, consisting of leading authorities on the clinical and scientific aspects of medical management, met in Fort Lauderdale on May 1, 2010 to discuss the reports and refine the consensus statements.

As with prior meetings, it was a daunting task to seek and obtain consensus on such a complicated and nuanced subject. It is unclear how each of us decides how we practice, and evidence to guide us often is sparse. Hence, this consensus, as with the others, is based not only on the published literature, but also on expert opinion. Although consensus does not replace and is not a surrogate for scientific investigation, it does provide considerable value, especially when the desired evidence is lacking. The goal of this consensus is to provide a foundation for medical treatment of glaucoma and how it can be best employed in clinical practice. Identification of those areas for which we have little evidence and, therefore, the need for additional research always is a high priority. We hope that this consensus report will serve as a benchmark of our understanding. However, this consensus report, as with each of the others, is intended to be fluid. It is expected that it will be revised and improved with the emergence of new evidence.

We mark the seventh consecutive year for the World Glaucoma Association Glaucoma Consensus with Consensus VII. Our topic is the Medical Treatment of Glaucoma.

Global experts were invited and assembled by our international co-Chairs beginning in November 2009, to participate in the Project Forum E-Room, a unique online opportunity to facilitate discussion of each of the consensus meetings. Participants then were engaged in the discussion of ten topical areas to reach consensus on key issues that surround and permeate all aspects of the medical treatment of glaucoma. The results of these thoughtful discussions then were summarized by each of the sections with preliminary consensus statements. The Draft of the Consensus Report, including the preliminary consensus statements, was distributed to the Societies and Partners for review and comments prior to the Consensus Meeting that took place in Fort Lauderdale on Saturday, May 1, 2010. Relevant stakeholders engaged on this day in a stimulating, educational, and thought-provoking session that highlighted the review and revision of the consensus statements. In response to comments during the discussion, sections on medical treatment of glaucoma during pregnancy and childhood glaucoma were added, along with Consensus Statements on these topics. The Consensus Report then was finalized by Consensus co-Chairs and Editors. Consensus statements were reviewed and finalized by the expert Consensus Panel.

1. Who should be treated?
Felipe A. Medeiros, Remo Susanna, Kuldev Singh 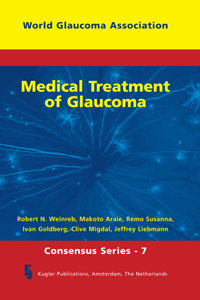